A critical look at the past week in boxing

Gervonta Davis and Isaac Cruz delivered a competitive, entertaining fight on Sunday. That shouldn’t be lost in any post-fight wrangling over the decision or anything else. And both fighters should be proud of their efforts.

Davis was face to face with a rough character, one who has been aptly described as a mini Mike Tyson. “Tank” withstood Cruz’s relentless pressure, outboxed the Mexican and emerged with a close, but unanimous decision at Staples Center in Los Angeles.

And the southpaw evidently did it with an injured left hand, which he said began to give him problems midway through the fight. His trainer said he suffered the injury in training.

If that’s the case, if he was hampered by a compromised power hand against a beast like Cruz, and still had his hand raised in the end, kudos to him. He deserves credit for a hard-earned victory, which allowed him to maintain his perfect record.

In terms of perception, Davis was a victim of his own success, including knockouts in his previous 16 fights. Falling short of expectations – everyone expected another stoppage – can have the feel of a setback but it shouldn’t.

Davis (26-0, 24 KOs) told me a few days before the fight that he knew he wouldn’t stop every opponent going forward. The goal is to win, however that looks. That’s what he did on Sunday.

What’s next for him? Davis fights in one of the deepest divisions in the sport, led by newly crowned undisputed champion George Kambosos, Devin Haney, Vasiliy Lomachenko, Ryan Garcia and others.

Indeed, Davis has many options. For now, he’ll allow his hand time to heal, commiserate with his handlers and then take the next step. And you can bet he’ll be a better fighter after the stiff test he endured on Sunday.

Isaac Cruz had reason to smile after his loss on Sunday. Ryan Hafey / Premier Boxing Champions

Cruz thought he did enough to get the decision but he didn’t seem to be too disheartened after the fight Sunday.

The 23-year-old Mexican fought in a similar way to Tyson, plowing forward and winging knockout-caliber punches to the head and body that got the attention of Davis and those watching.

Plus, he also was difficult to hit cleanly, which added to the challenge Davis faced. And, when Tank was able to connect, Cruz was never hurt. That’s saying something given the fact Davis is one of the biggest punchers in the sport.

In the end, Cruz walked away with his second loss but the fans saw what they saw, a thrilling brawler who almost took down the lightweight boogeyman on a big, pay-per-view stage. As a result, he went from a fringe figure to a major player in the division over night.

“The eyes of the world were … on this fight,” he said through a translator, “from Europe, to Latin America, to the United States. I showed that this Mexican warrior is here to stay. I showed what people love.

“And even better, [big] things are coming up next.” 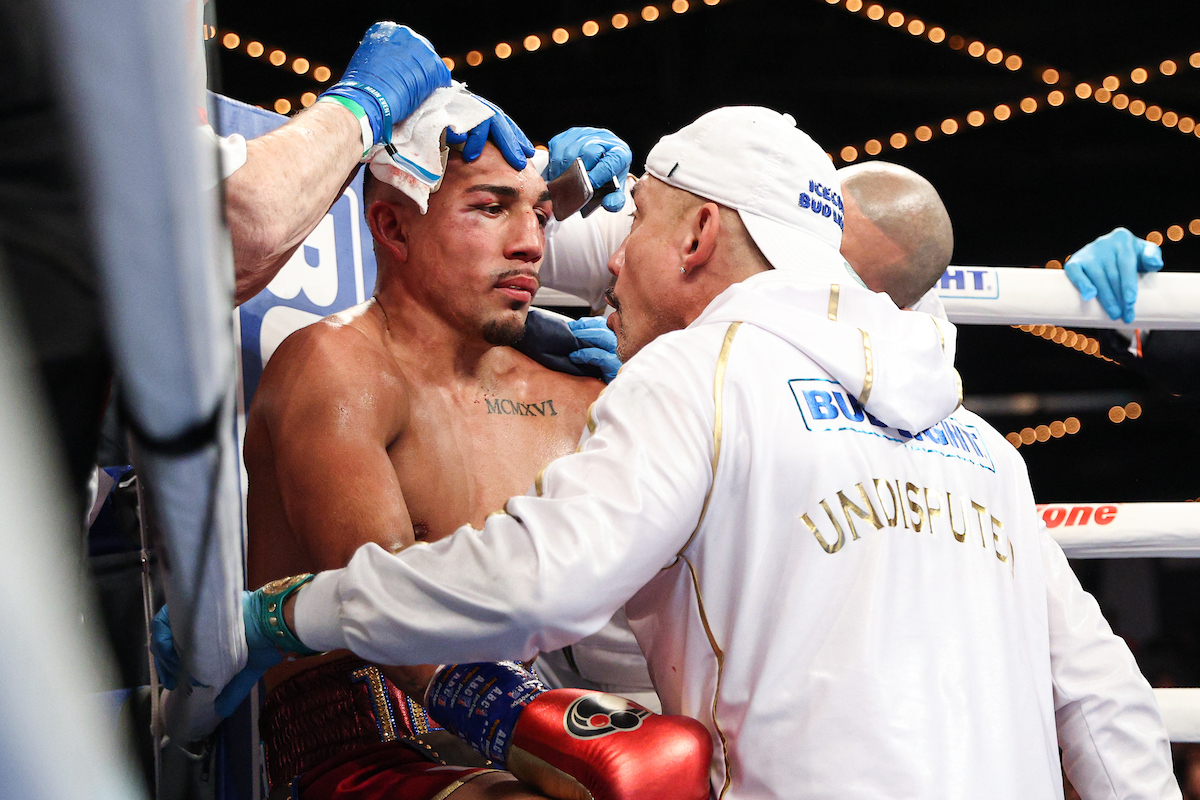 Doctors said Teofimo Lopez was lucky he was killed in his fight with George Kambosos. Ed Mulholland / Matchroom Boxing

Teofimo Lopez’s examination results after his loss to George Kambosos on Nov. 27 in New York was about as disturbing as it gets.

Doctors told ESPN that the fighter was lucky to have stepped out of the ring alive given the condition in which he stepped into it. He was determined to be suffering from pneumomediastinum, a condition in which air is present between his chest and lungs.

“He could have died, for sure,” said Dr. Linda Dahl, who believes the air might’ve come from a small tear in his esophagus. “How he breathed, I can’t even explain to you. It’s like somebody tied a 300-pound set of weights around his chest … like his neck and chest were in a vise. That’s how he fought.”

Lopez knew something was wrong the day before the fight, when he experienced shortness of breath and swelling in his neck. His father suggested he see a doctor but, concerned that the fight might be canceled, he refused.

“I thought it was just my asthma,” said Lopez, who kept mum during his pre-fight checkup on Friday. “I fought through asthma before. If I told everybody, they would’ve canceled the fight. But I chose not to, because of the amount of pressure I was under. I didn’t want to hear people say, ‘Oh, another postponement.’”

I don’t know whether officials could’ve done anything to prevent Lopez from entering the ring based on what they knew. And I believe Lopez when he said he thought asthma was causing his discomfort.

I would just hope that fighters would put their well being ahead of boxing. There will be other fights. I also would hope that diligent officials worldwide will take a good look at the facts surrounding Lopez’s condition to determine whether the situation could’ve been avoided.

Floyd Mayweather’s rant about bad judges and ignorant boxing writers after Davis’ victory over Cruz was just more of the same from a fighter-turned-promoter who has always enjoyed fine whine. He covered a lot of bases, though. That included a shot at consensus pound-for-pound king Canelo Alvarez, who Mayweather defeated by a majority decision in 2013. “I’m going to tell you the truth about Canelo … that m—–f—– was easy, a cake walk. Easy. Y’all are praising this dude. This dude was nothing. I was almost 40 years old when I cooked that dude easy.” Indeed he did. Judge C.J. Ross turned in one of the most disgraceful cards in boxing history, 114-114, but Craig Metcalfe and Dave Moretti had it 117-111 and 116-112 for Mayweather, which I thought was generous to Alvarez. I had it 120-108, a shutout. In fairness to Alvarez, he was only 23 at the time and is a much better fighter today. … It appears that Sergiy Derevyanchenko (13-4, 10 KOs) might finish his career as a guy who couldn’t get over the hump. The talented, rugged Ukrainian gave strong efforts against Daniel Jacobs, Gennadiy Golovkin, Jermall Charlo and now Carlos Adames (21-1, 16 KOs) on the Davis-Cruz card but fell just short each time. The 37-year-old Ukrainian is highly respected but he’s 1-4 in his last five fights and hasn’t had his hand raised in 2½ years. Perhaps he’ll get one more shot but the clock is ticking. Meanwhile, Adames’ break-through victory makes him a player at middleweight or possibly junior middleweight. The Dominican looked on Sunday like a threat to anyone…

Sebastian Fundora (18-0-1, 12 KOs) continues to roll even when it isn’t pretty. The 6-foot-6 junior middleweight contender had a tough time against aggressive Sergio Garcia (33-1, 14 KOs) in their 12-rounder on the Davis-Cruz card but ultimately outboxed and outworked the Spaniard to win a unanimous decision. I’m not sure how far “The Towering Inferno” will go but he finds ways to gain advantages over his opponents. I won’t be shocked if he produces an upset or two in the near future. … I don’t have much good to say about YouTuber-turned-boxer Jake Paul beyond his undeniable ability to market himself. However, I have to acknowledge his chutzpah for agreeing to face Tyron Woodley a second time after Tommy Fury pulled out of their Dec. 18 fight because of health issues. Paul almost lost to Woodley in the first fight yet was willing to do it again. Good for him. 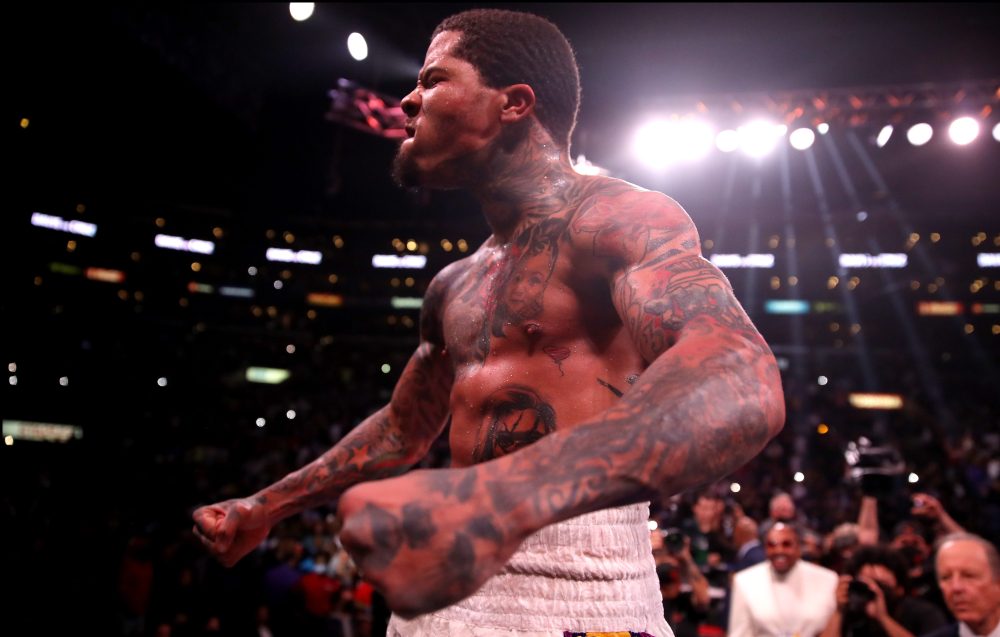 Hrgovic v Yoka Up In The Air...

Would Joshua And Whyte Step Aside For...